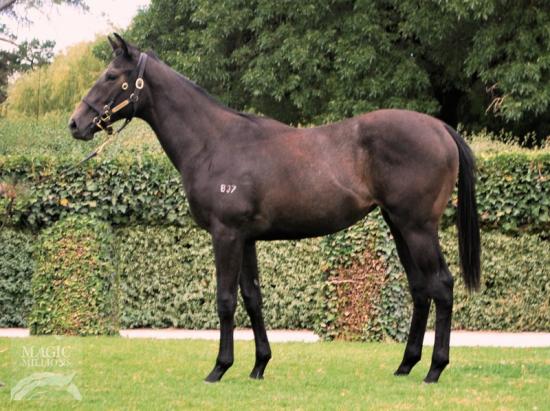 This lovely grey filly is from the first Australian crop of 68 yearlings by champion sire & racehorse Dalakhani and now champion broodmare sire.

Her dam All that Sparkles (by champion broodmare sire Rubiton) has produced a Group winner from only her first two starters.

A proven sire in Europe, Dalakhani has an impressive race record. He is one of the best & proven sires ever imported to Australia with 8.6% stakes winners to runners with only Danehill better @10% Unbeaten in three starts as a 2YO, including victory in the Gr1 Criterium International, Dalakhani kept up the good record as a 3YO. During that season he won five of his six starts, including wins in the Gr1 Prix du Jockey Club, Gr1 Prix de l’Arc de triomphe, Gr1 Prix Lupin , plus he finished second in the Gr1 Irish Derby. He was crowned Horse of the Year and Champion 3YO in Europe; as well as Champion 3YO Stayer in France, earning a Timeform rating of 133.

Colin's view, " she is a half sister to a stakes winner and is by an outstanding sire whom has done it all in the northern hemisphere. She has a lovely head, good frame, great walk with a good flowing stride. Most likely a middle distance type but with plenty of scope and out of the right type of mare for this international stallion"

Dalakhani retired to stud in Ireland in 2004 and has left 44 stakes winners, headed by Gr1 winners Conduit, Integral, Reliable Man, Chinese White, Seismos, Duncan, Second Step and Moonstone. The deeds of his imported son Reliable Man (winner of the Gr1 Queen Elizabeth at Randwick) make his stud career easily recognisable for locals. Reliable Man now stands in NZ and also has his first crop of yearlings this sales season.

By French Champion Sire and Champion Broodmare Sire Darshaan, Dalakhani is one of 88 stakes winners by his sire whose other sire sons include Mark of Esteem and Zerpour.

Dalakhani is out of Listed winner Daltawa (Miswaki), who is also dam of Horse of the Year and seven-time Gr1 winner Daylami, and stakes winners Dalghar and Daymarti. Her daughters and granddaughters have left Gr1 winner Dalkala (Champion Older Female in France in 2013) and Dolniya (winner of the 2015 Gr1 Dubai Sheema Classic).

A shuttler by arrangement with the Aga Khan represented by first crop Australian yearlings, Dalakhani is a European Horse of the Year who at three won the Prix de l’Arc de Triomphe and French Derby and whose Ireland sired progeny include eight Group1 winners, four of them successful in Classics.

If you wish to view or discuss the filly feel free to contact Colin on 0417 310 249 for further information or click enquire button to send email, thank you for viewing our Horses available page, we look forward to meeting you