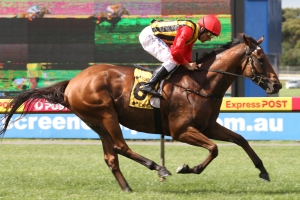 Connections came from far and wide to see the Colin Little trained Cavendish streak his rivals in the $30,000 Theo Super Vobis Handicap (1400m) at Betfair Park Hillside.
Little was thrilled for owners Ellis and Bev Gough who made the five hour pilgrimage from Shepparton to be trackside for the encouraging win.
"The Gough's have been long term and patient clients of the stable and Bev is recovering from a recent stroke so to see the horse win for them today was a big thrill," said Little.
Cavendish ($3,$3.60,$3) was quickly away and Oliver was happy to sit just off the speedy Karoo ($4.60,$5,$4.40) peeling off its heels upon straightening and after balancing up flattened out well to defeat Karoo by over two lengths with Star Scream ($3.80,$3.50,$3.60) a length away third.
The win was the first this time in for the lightly raced three-year-old and Little believes it could've easily have been more. 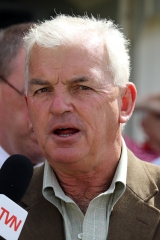 Colin Little Speaks After The Win

"He hasn't had much luck this preparation," said Little after the win.
"The smaller field today and cut out of the ground probably helped him out a lot and he deserved the win."
Despite a solid tempo Little was pleased to see Cavendish on the pace.
"I was happy to see him on the pace and out of trouble," he said.
"They never go too hard here at Sandown so you don't want to get too far back."
Little observed that the breeding traits were quite evident in the performance.
"Being out of a Stravinsky mare probably puts a little ping into him," said Little.

"I also think he will relish the cut out of the ground being a New Zealand bred horse and he could improve on a slow track."
Damien Oliver was forthright in predicting a bright future for his mount.
"It was a good win," said Oliver.
"He will certainly graduate to Saturday class."
The win takes Cavendish's win tally to two from just five starts and his career earnings to over $25,000 putting him well on the way to recouping his 2008 sale price of $65,000.
Photos By Sportpix