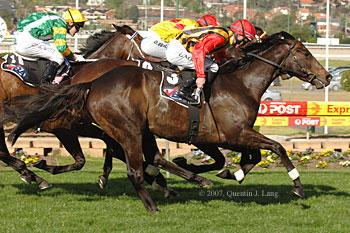 2007 Cox Plate winner El Segundo has been retired after sustaining a tendon injury in Saturday’s Group One George Ryder Stakes (1500m) at Rosehill.

Trained by Colin Little, El Segundo finished an admirable fifth on the weekend behind Danleigh when ridden by Craig Williams.

"He had trouble getting around the Sydney way of going,” Little told Sport 927 this morning.

"He wanted to go out and Craig (Williams) was trying to hold him in and I think the battle that ensued...well at the end of the day he has strained his right tendon.

"He has previously had a problem with his left tendon but that's been 100% rehabilitated with the stem cell treatment.

"It still takes a year to rehabilitate these horses.

"We scanned him and it's certainly there and with consultation with the owners we thought that he'd be a nine-year-old at least before he comes back and we don’t want to go to the well one too many times so the decision has been made to retire him,” he added.

His last Group 1 victory in the Cox Plate also proved to be the last win of his career with Little revealing that triumph was his personal highlight.

"In 2006, he was beaten an inch and you don’t often get the opportunity to come back and be there again but he was good enough to back up the next year and win quite easy."