Work The Room Still On The Sidelines 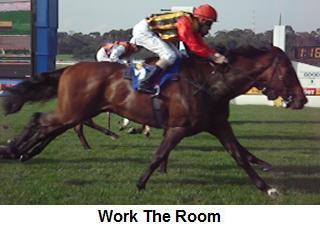 The patience of trainer Colin Little is being tested with his lightly-raced unbeaten four-year-old gelding Work The Room not expected to play any part over the autumn carnival.

Currently nominated for the $1.5million Group 1 Emirates Doncaster Mile (1600m) at Randwick on April 17, Work The Room has not raced since last May when winning impressively in a restricted three-year-old event at Sandown Hillside.

Work The Room trialled at Cranbourne in late January over 990m with a view to a possible tilt at the Group 2 Blamey Stakes (1600m) as a stepping stone for greater things. But those plans were unable to be realised.

“We brought him in but we’ve just had some feet problems with him,” Little told the Virtual Formguide.

“The horse is sound apart from his feet, a few things have gone wrong - a few foot abscesses.

“We were going to race him but he wouldn’t have been 100% right and obviously feet isn’t something you can get right overnight.

“There’s nothing you can do, you can’t give them injections and you can’t do much to turn it around.

“We were pushing along, it’s quite disappointing to have a four-year-old with only two starts but we had to turn him out.

Colin Little“We tried hard to get him right,” Little said before adding “We’d like to get the horse going.”

When asked if the Work The Room could be prepared for the Brisbane winter carnival Little replied, “If we got him back in time, we’d certainly go to Brisbane because he needs racing.”

“It’s all well and good to have a lightly-raced horse but he’s not very seasoned.” 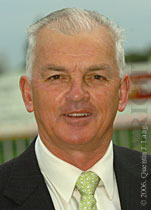 Work The Room won on debut at Ballarat in a 1100m maiden and in doing so defeated Casual Friday who has go onto win multiple races in the metropolitan area.

At his second start, Work The Room accounted for Tumbulgum who has since been sold to Singapore and has won three from four starts at Kranji for trainer Michael Freedman.

Purchased for $160,000 from the Easter Yearling Sale, Work The Room is a half brother to three-time winner of the Group 2 Sandown Classic (2400m) Zipping.