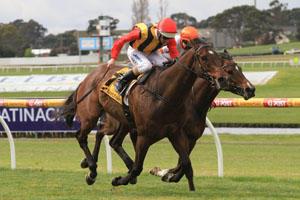 Despite an on course drift in the betting ring, the Colin Little-trained Work The Room broke through for his first win this preparation in the $30,000 Royal Charter Handicap (1700m) at Betfair Park.

Work The Room ($3.50,$4.20) jumped well and was ridden positively by Luke Nolen who gave the lightly raced five-year-old the run of the race sitting just off the pace with cover.

Turning for home, Work The Room looked to have the race won but a late charge along the rails by Foxham ($9,$10) resulted in a winning margin of just half a length with Sea Galleon ($13) closing strongly for third just three lengths away.

Little was relieved to be back in the winners circle with the Bel Esprit gelding who has carried big raps since showing a brilliant turn of foot at just his first race start.

"It was nice to be two to three lengths in front of Rundle in the run," said Little after the win.

"He is a pretty promising horse and being Zipping's half brother he has always had a rap on him."

Little admitted the gelding's failure at its previous start was most likely due to four week gap between runs due to unsuitable racing surfaces.

"We were looking for a good track and because we scratched him a few times he probably got to Sale a bit soft because we ticked him over a bit long," he said.

"I still believe he will improve on top of the ground so there could be more improvement in him.

"Bossy rode him on the course proper at Caulfield and said he felt much better on top of the ground."

Nolen believed that whilst he had the run of the race, the gelding would be better suited chasing, after losing interest when he hit the front.

"He got to the front a bit cheaply and didn't know what to do when he got there," said Nolen.

"He gives me the feel of a good horse and I think he will be better when he is chasing.