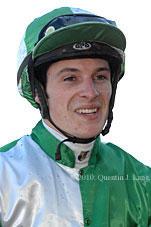 This afternoon at Mornington the Melbourne Racing Club held it's Queen's Birthday meeting down on the Peninsula and in the old "get out stakes" Sweet Talking Guy got punters out of trouble.

The son of group two AAMI Vase winner Ustinov, Sweet Talking Guy came with a sustained run to take out the 0-72 1500m event.

Ridden to perfection by Ben Knobel Sweet Talking Guy settled at the back of the field and made a long run around them from the 800m mark to hit the front on the point of the turn.

With challengers coming left, right and centre down the straight, Slow Talking Guy held of all of the opposition to claim victory by a head.

Slow Talking Guy is owned by the Seven Creeks Estate Syndicate which is managed by Dennis Marks, former owner of the champion race mare and Melbourne Cup winner in Let's Elope.