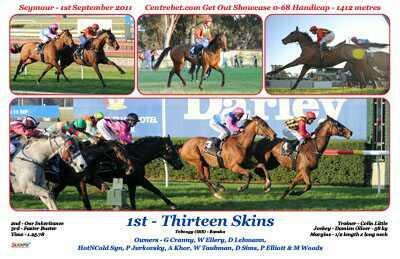 Lightly raced but exciting five year old entire, Thirteen Skins made an explosive return to the track at Seymour 12 days ago.

The son of Tobougg was having his first start back in just over 12 months and showed what great ability he has by snatching victory right on the line.

Colin Little has always had a high opinion of Thirteen Skins and it was no surprise to him to see the horse win first up.

Ridden by champion jockey Damien Oliver, Thirteen Skins showed he is right back on target for a great preparation with Oliver having something in hand right on the line.

Another wonderful training effort by Colin to get Thirteen Skins back into the winners stall as the horse bowed his tendon some time ago and it was a slow and thought out programme to get him back to the track.

Thirteen Skins was actually bred by Colin's late with in Jacquie Little, so its nice to see her pedigree matings are still of high success and hitting the line in first position.

Thirteen Skins has been accepted for Sandown on Wednesday in 0-72 1600m with Damien Oliver back in the saddle.

Let's hope Thirteen Skins can be it two form two after Wednesday.

In other stable news last start Morphettville winner, Forty Two Below has just had a couple of weeks in the paddock in preparation for his spring campaign.

A winner of four races from only eight starts, Forty Two below will now be set for a sprint race over the four days of the Flemington Carnival.

I'm sure Thirteen Skins will also be heading that way if he continues to race at the level he is.

Soft Sand, a winner at her only start at Bendigo back in July has since been spelled following that run and will now be set for an autumn campaign.

Colin just felt that the filly would be too immature for a spring campaign and would be much better off waiting until the autumn.

Soft Sand does look an exciting filly as she was a comfortable winner at Bendigo with Damien Oliver in the saddle, winning be just on three lengths.

Good luck to all the connections of Lord Lodge over the coming months and let's hope there are plenty of winners in store!