Soft Sand Romps in at Sandown 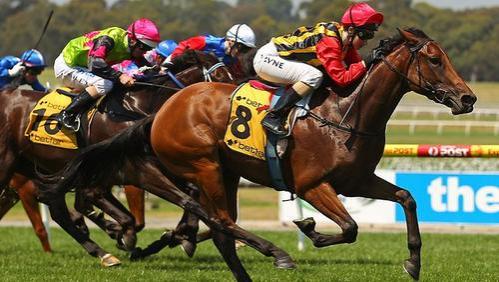 COLIN Little told Michelle Payne just to trust the ability of Soft Sand and the filly justified her trainers faith as she posted an eye-catching last to first win in the Ladies In Racing Magazine Handicap at Betfair Park.

Soft Sand, backed from as much as $5.50 to $2.60 favourite, gave her rivals a start and a decent beating to maintain her unbeaten record.

Little said Soft Sand, having her first start since winning impressively at Bendigo in July, had always displayed enough to suggest she was a “Stakes class” filly.

He added he will give this daughter of Dansili, the sire of former English champion Harbinger, seven days in the paddock before taking aim at the autumn carnival.


“I was a bit worried about the 1000 metres, I knew she would get back, but she is obviously very good as she was able to give them a big start and beat them pretty easily,” Little said.

“We found ourselves a bit ahead of where we wanted to be, but as a maiden winner she may have struggled to gain a start in those black type races so we thought we would pick a metropolitan race for her.

“Today’s win should ensure that we get a run in those good races in February.”

Little noted that while Dansili can throw a sprinter, most of his progeny can perform at 2000 metres.

He said it’s hoped that Soft Sand can extend to 1600 metres and “hopefully even further”.

“One of the reasons why we didn’t want her to be up there today is that we want to teach her to relax and leave it to her natural ability.”

“Colin said ‘just trust her ability’. She jumped nicely enough and I found myself behind Luke Nolen (Amour Cache) and I thought he would be a good one to follow,” Payne said.

“Straightening for home I had a lap full of horse. I didn’t want to go too soon so I just kidded to her for most of the straight.

“She did it very easily to the line. I think she is the real deal.”

Soft Sand scored unextended by one and a quarter lengths from Song Of The Bell, backed from $6.50 to $5, with a nose to Amour Cache, $14, third.