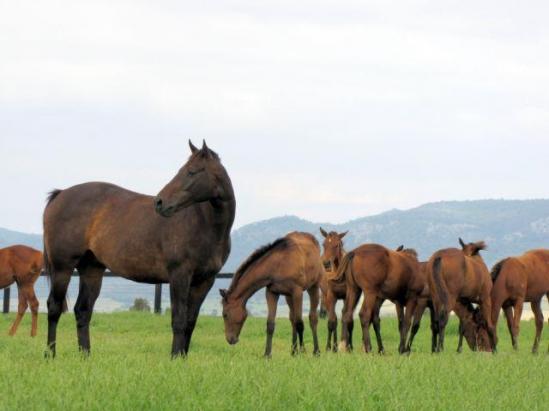 Colin Little had reservations when he heard that El Segundo’s post-racing career would be spent as a nanny. It wasn’t that the Caulfield trainer didn’t think the future stars of the racetrack could learn a thing or two from the 2007 Cox Plate winner, he simply doubted whether it was in the gelding’s nature to nurture.
A ferocious desire to win every time he stepped onto the racetrack was the hallmark of a career that saw El Segundo win 12 of his 35 starts and amass just under $4 million in stakes.
So it was a surprised Little who discovered that El Segundo had become one of the star mentors to the young horses at Amarina Farm in New South Wales.
“One of El Segundo’s owners, Andy Evans, is friendly with the owners of Amarina Farm and they wanted him up there,” Little says. “I wasn’t quite sure how he’d go because under saddle he was very aggressive towards the other horses. He’d lay his ears back and want to beat them in every race.
“So I wasn’t sure, but apparently he’s tough on the weanling colts but fair. That’s great to see, because he’s been a fantastic horse for me and the owners and we’re very happy that he’s having a great retirement.”
El Segundo spends his days keeping Amarina Farm’s newest residents in order. Young horses spend the early part of their lives with their mothers, but they are soon weaned off and sent to paddocks in groups where a nanny will protect and guide them.
Amarina Farm’s Amie Bingham said the role of a nanny was an important one and was a great post-racing vocation for thoroughbreds.
“Once we’ve weaned the weanlings we split them up into colts and fillies and a nanny will have nine or 10 horses to look after,” Bingham says. “We run them with a nanny because it keeps them a bit quieter in the paddock and, also, when you’ve got to move them or run them into a paddock, a nanny will lead the way so they follow and they don’t get all confused. They just babysit basically.
“It’s great for us to be able to give these retired horses the opportunity to do something else. Not all retired racehorses are suited to going on to eventing or something, so it’s good for us to be able to give them a life beyond racing that is still useful.”
There are not many better places for a racehorse to retire to than Amarina Farm. Operated by Craig Anderson and his wife Sue, in partnership with US-based co-owners Gavin Murphy and Catherine Donovan, Amarina Farm is set on 170 hectares 10 kilometres outside Denman in the Hunter Valley and prepares weanlings, yearlings and mares for major sales.
It has been in operation since 2006, but has already had elite-level success with Thousand Guineas and Australasian Oaks winner Gallica bred there along with New Zealand group 1 winner The Heckler. Amarina Farm also has other top performers on its books with group 1 winners Aqua D’amore and Absolut Glam among the mares to foal there, while Manikato Stakes winner Typhoon Zed is another group 1-winning male nanny.
But El Segundo has been the star of the show since arriving in June 2010 and the 11-year-old’s paddock is by far the most popular among tour groups.
This year’s Cox Plate is the fifth since the son of Pins powered home clear of Wonderful World and Haradasun to give Little his biggest win in racing. It also atoned for the heartbreak of 12 months earlier. In the 2006 Cox Plate, El Segundo started favourite and hit the front about 50 metres from home, but he was caught on the line by Fields of Omagh, who scored his second win in the big race that day.
A tendon injury robbed El Segundo of his chance to defend his title in 2008, but he returned in 2009 to run an eye-catching fourth, behind then-untapped three-year-old So You Think, even though El Segundo was seemingly past his best.
“He was beaten an inch in 2006 when he just didn’t have much luck at the barrier draw,” Little says. “He drew 13 and, with his style of racing, had to get back from that barrier, but once he drew a good barrier he was right up on the pace. It was a different story the year he drew a good barrier and it was great to win it.”
El Segundo won a further three group 1 races, all at Caulfield. His victory in the 2005 Caulfield Stakes saw him start favourite the next week in the Caulfield Cup, where he finished sixth. He also won the 2006 Underwood Stakes and the C.F. Orr Stakes in 2007.
It’s a record that demands respect and El Segundo insists that the youngsters he looks after do likewise. The nature that Little thought might go against him being a nanny is in fact an asset, says Bingham.
“He’s a bit grumpy and can be very bossy, but that makes a very good colt nanny,” she says.
“Because he bosses them around a lot, he doesn’t let them get away with too much, which, from our point of view, is good because when they come in they have a bit of respect for you.”