Promising filly Miss Softhands out of action for the autumn 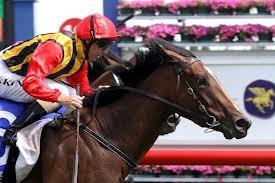 The autumn campaign of promising filly Miss Softhands is over following a freak mishap in a trial at Werribee on Monday.

Trainer Colin Little said an injury the filly sustained on the way to an eight length win that appeared to have set her up for a lucrative carnival was worse than first thought and required surgery.

Miss Softhands, an impressive winner at her only two starts, had been due to run in Saturday’s Kevin Hayes Stakes at Caulfield.

But as she sped along in front of the field in Monday’s trial, the riderless Wales galloped on her from behind, catching her just above the off side hock.

“It’s a rotten piece of luck, she was really coming along well,” Little said.

Little said the extent of the injury was revealed when he stopped at the Werribee veterinary hospital after leaving the track.

Routine surgery was undertaken almost immediately to flush out the wound and ensure tendons and bones in the vicinity escaped damage.

Miss Softhands is expected to make a complete recovery but it is anticipated she won’t run again until the spring.