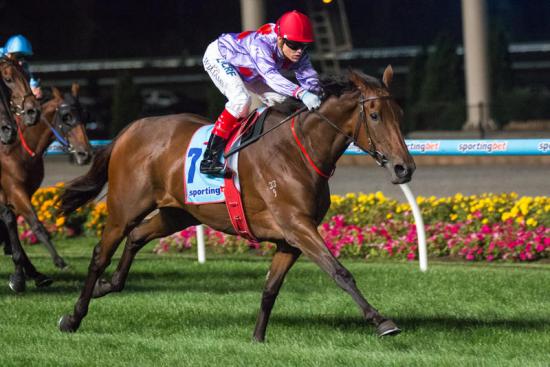 A brilliant last to first ride from Craig Williams has given the Colin Little trained mare Text'n Hurley victory in the Group 2 Sunline Stakes at Mooney Valley.

After jumping Williams eased Text'n Hurley straight back to last and settled beautifully on the back of a hot speed set by Sinhala. With about 600m to go Williams stoked the mare up and she began to track around the field and by the 200m mark she had joined the leaders and was full of running.

Over the final 100m Text'n Hurley really strode out putting over two lengths on the field to complete was a very dominant win, with Bippo No Bungus holding on for second 2 1/2 lengths behind, and You're So Good Third a further 3/4 of a length further back.

After the race Trainer Colin Little saying how the removal of Ear-Muffs for the first time in her career seemed to have a very good effect.

"The ear-muffs have been on her since she was a yearling. There was a problem in the barriers when she was been broken in,” Little explained.

"We had not been game to take them off, but I was worried about her hitting a flat spot in her races as she has a habit of doing, fortunately it wasn’t there tonight.”

Little also suggested that the mare may be a headed towards a Caufield Cup preparation in the Spring.

"She is a stayer, but because the mares races are 1600 metres, we brought he back in distance, She is actually a 2400 metre horse just been kept fresh,” Little said.

"She stood up tonight, there has to be a race for her somewhere in the spring for her.”