No drama for SOOSA RAMA with another win at the Valley 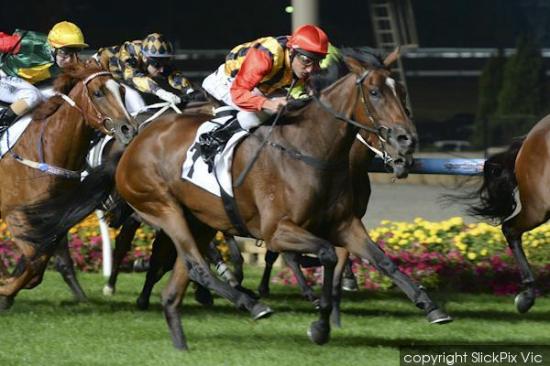 Soosa Rama defied a leader bias to maintain her unbeaten record in the 1 Print Hcp (1200m) at Moonee Valley on Friday evening.

The promising daughter of Bel Esprit stormed home from last at the half-mile for her third win in a row.  With Damien Oliver aboard, she ran down front-runner Chloe In Paris by three-quarters of a length.

“We wanted her closer to the speed but things didn’t go according to plan,” trainer Colin Little explained.  “That’s why you book a jockey like D Oliver.

“She hasn’t done anything wrong yet and it was a good effort tonight.  I will see how she pulls up but we might give her a rest now.”

Soosa Rama (3f Bel Esprit – Make My Dane by Danehill) started her career with victories at Cranbourne and Moonee Valley in January.  She is from a two-time winning Moonee Valley mare who is a three-quarter-sister to Danehill stakes winner Springsteen.

Phoenix Broodmare Farm sold her as a foal for $40,000 at the 2011 Inglis Great Southern Weanling Sale.  Phoenix owner Damian Gleeson topped Sessions I and II at the Inglis Melbourne Premier yearling sale earlier this month.

Soosa Rama impressed Oliver with her finishing burst.  “She’s going to win better races,” he declared.  “She didn’t show much speed from the gate but felt comfortable in running.  They weren’t coming from behind tonight so it was a good effort.”