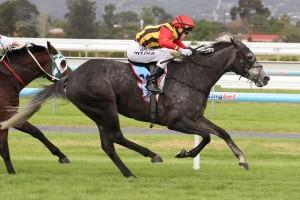 Punters have been left reeling as the Colin Little-trained Blue Ribbon caused a boilover in the listed Centaurea Stakes (2006m) at Morphettville. Coming from seventh on the fence some ten to 12 lengths from the tearaway leader Court Pastoral. She commenced a long run from the 700m three wide to be challenging the leading three who justifiably were tiring before the home turn. She turned for home in second position travelling well, before taking the lead
at the 200m. She was well handled by Jason Holder and battled strongly when in front and drew away to score by a little over a length.

The grey daughter of Royal Academy had finished near the rear of the field in all four runs back from a long spell, which she began following her fourth placing behind Lake Sententia in last year's Centaurea Stakes.

Blue Ribbon brought up the fifth win of her career and took her prizemoney tally past $200,000, making her owners happy with a Black type win.

Click on link to view her wonderful win http://youtu.be/HCYPeteBLMs