A great start to 2015 for Lord Lodge runner Absolutelycertain 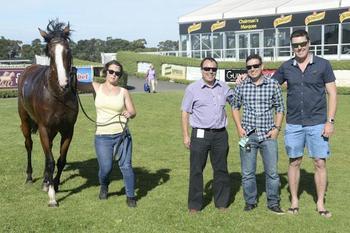 Promising 3yo filly Absolutelycertain headed to Mornington New Years day for her second run this preparation. The stable had high hopes as she was running over a more suitable distance and had trained on after her first up run. She broke well from the barries and jockey Mark Pegus allowed her to settle midfield before moving to the outside at the 600m, after a long sustained run around the field she got to the lead half way down the straight before running away to win comfortably by more than a length. Colin will be looking to place her over more distance next start and hopefully another win for her connections.