Foreplay filly with the interesting name wins well on debut 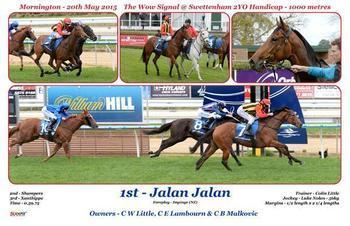 2yo Foreplay filly Jalan Jalan finished powerfully to make a winning start to her career at Wednesday’s midweek meeting at Mornington. Rider Luke Nolen allowed the filly to settle midfield behind the leaders then approaching the top of the straight he switched around their heels and showing great acceleration she was able to run them down and win by 1/2 length from second placed Shampers, reversing their places when they last met at the Cranbourne trials.

Jalan Jalan, named by one of her owners whom lives in Kuala Lumpur, roughly translates to go for a walk or stroll / window shopping. The Foreplay filly was picked out by trainer Colin Little at the 2014 Inglis Australian Easter Yearling Session 2, NSW for only $40,000 and after collecting $28000 for her first win, including Super Vobis, it looks like she is well on the way to recouping costs this preparation.

"With the ensured good tempo at the 1000m with the exposed form, they ran along and she travelled nicely behind them.

"When she was presented with the race, she accelerated well.

"If she continues to improve, she’s still a really raw product at this stage, she’s going to have a really exciting future.”

Looks like an exciting time for her owners and the Lord Lodge followers with a few new 2yo's still to come this season.

Colin is currently overseas on his annual golfing trip and the stables have been well managed by assistant trainer Matthew Lindsay, whom has kept his winning streak going as he took Blue Ribbon to Adelaide last year when she won the Centaurea Stakes.