Safariann makes it two from two and earns a holiday 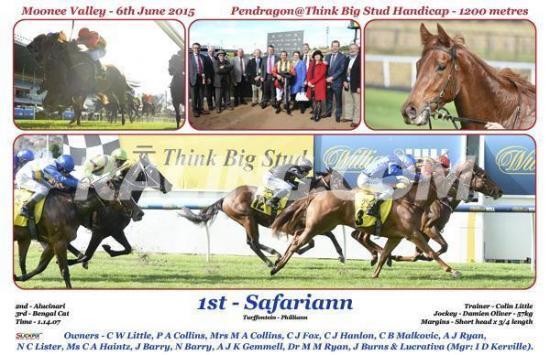 Trainer Colin Little is known for his patience, ensuring the tip was out well before two-year-old filly Safariann won at Moonee Valley on Saturday.

Safariann backed up eight days after her debut victory at Geelong to score a last-stride win in the Pendragon @ Think Big Stud Handicap under Damien Oliver.

Easy in the market from $3.80 to $4.20, Safariann scored a short-head win over the favourite Alucinari ($4) with Bengal Cat ($61) three quarters of a length away third.

Little said he had kept a close eye on the filly throughout the week before giving her the all clear to start on race morning.

"We looked at her all week and were confident this morning that we hadn't made a mistake in backing her up too quickly," Little said.

Little had concerns coming to the turn with Safariann held up in traffic but knew he had one of the best in the saddle in Oliver.

He said the filly was now likely to go for a spell.

"We said before today's win, lose or draw that she would go out into the paddock so I don't see any reason to bust her this preparation," Little said.

"I would think there's enough filly there to suggest we could aim at something a bit better at the carnival."

The victory put Oliver one win clear of Craig Williams in the Melbourne jockeys' premiership race.

To view her win just click on the link