Unalaska brings home the bacon with a dominant win 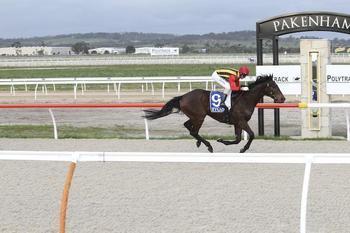 Colin took four runners to Racing.com Park Synthetic: Pakenham Racing Club today with Deputy Dan and Dragon Bridge both running 3rd first up from a spell in their respective races and Unalaska winning his race in a dominant fashion. Well ridden by Glen Boss, Unalaska raced to the lead at the 400m mark before Bossy gave him a few cracks with the whip to keep him going and he dominated the field to win going away by over three lengths. He raced as though he wants more ground so will probably be stepped up in distance next time out. Absolutleycertain finished 6th in the same race.

Dragon Bridge raced at the rear of the field until the 600m mark where jockey Jake Noonan shook him up to start his long sustained run round the outside of the field. He kept giving all the way to the post finishing third to the smart Darley runner Etymology. Looking for more ground but a super run in only his second race start. Deputy Dan, also having only his second race start and first up from a spell, trailed the field for most of the race. He was under hard riding by Damien Oliver and looked to be no chance for a place but motored home over the last 100m to grab 3rd. Also raced like he needs it further. All up a good day for Lord Lodge, with a winner and some nice runs for their respective owners.