Onwards & upwards for Uncanny Effort after he breaks his maiden 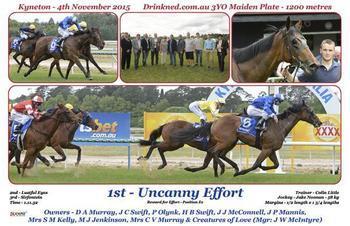 Three-year-old Uncanny Effort scored a good first-up win to break his maiden, assisted by a well judged ride from Jake Noonan. He settled well in fifth place on the rails from barrier one, before switching deep on rounding the home turn. He challenged at the 100m and then finished over the top of the leaders to score nicely, in what appeared to be a strong race.  The Reward for Effort gelding has had an extended time in the paddock since his last outing and has grown into a massive individual. Colin placed him well, as the race was both Super Vobis and Vobis Gold allowing his owners to benefit from an extra $20300 in bonuses, making it an ejoyable day out for all his connections.