Sir Berus breaks through for Lord Lodge at Moonee Valley 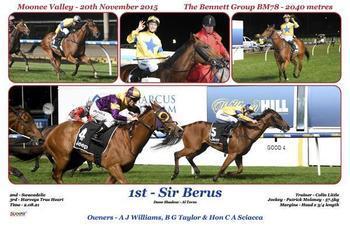 Sir Berus finally got the win he deserved when stepping up in trip in the Bennett Group Handicap (2040m) at Moonee Valley.

Sir Berus joined Colin Little’s Caulfield stable early in 2015 but had not managed a win despite running some terrific races at a variety of tracks before his Moonee Valley success.

The son of Dane Shadow had never raced over further than 1600m but relished the jump to 2040m in his latest assignment.

Apprentice Patrick Moloney was able to position Sir Berus closer to the speed because of the slower tempo of the longer race, which allowed the six-year-old to get into the right rhythm from barrier one.

Sir Berus relaxed perfectly for Moloney before a lovely run opened on the inside of the leader rounding the home turn.

The gelding was good enough to capitalise on his slice of fortune before opening a two-length break at the 150m.

The backmarkers ran on late but Sir Berus saw it out to record a determined victory, the seventh of his 41-start career.

Sir Berus also took his earnings to more than $257,000 courtesy of the $22,000 winner’s cheque for his Moonee Valley success.

Congratulations to Sir Berus’s owners on their first Victorian win with the consistent galloper.