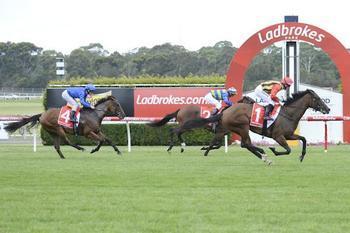 Getting Miss Softhands to the races is a challenge in itself but the Colin Little-trained mare emphasised her quality with her Sandown Lakeside win.

“She’s had some dreadful feet problems and she actually went to Werribee where they brought in an international farrier, who did a lot of work on her feet,” Little told Racing Victoria.

“She used to climb a bit but she’s got a much better action now.”

While Little has one problem under control, Miss Softhands showed he has some work to do to get her to realise her potential when she over-raced during the $40,000 contest despite the best efforts of experienced jockey Noel Callow.

Miss Softhands’ refusal to settle prompted Callow to let her stride earlier than he wanted with the daughter of Bel Esprit joining the leaders entering the straight.

However, Miss Softhands proved too classy for her opposition in the last 200m as she drew away to score by three-quarters of a length, justifying the faith of those that backed her from $2.40 to $2.10 on track.

“I’m glad it (the race) wasn’t a lot longer,” Little said. “I’m sure Noel didn’t want to go that early but she was pulling that hard that he just let her go.

“She was good enough to get away with over-racing but it’s a bit of a concern so we’ll just have to keep working on that.”

Little said Miss Softhands would continue to work through her grades while she could get out to 1600m if she learned to settle better in her races this time in.

Congratulations to Miss Softhands’ patient owners and all involved in the hard work of getting the classy mare to the races.